When I went looking for a lightweight camping trailer, pop-up camper, or tent camper that I could tow behind a small car, I discovered that those available for sale were quite expensive and too close to my car's towing limit to carry much cargo, not that they had much room for anything but sleeping anyway. I decided to build a pop-up camping trailer myself, and I later modified it with a tailgate for loading heavy items like appliances and with removable walls so that it could serve as a flatbed trailer to carry 4x8 sheets of plywood and foam board insulation. It has much more cargo capacity than any of the commercial camping trailers for small cars and is lighter than all but a few, and its pop-up top minimizes its wind resistance in the down position, which helps greatly with gas mileage and handling. It was easy to build with common tools and no welding, and it was extremely inexpensive compared to any of the commercial options or any of the other DIY trailers I read about. I wrote a book to explain in detail how I did it. 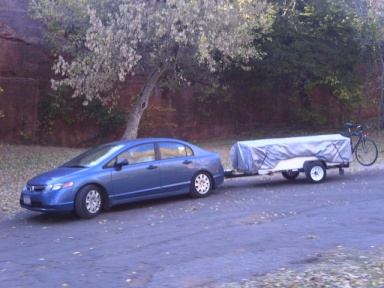 I call the trailer the BYOPUCT (Build Your Own Pop-Up Camping Trailer). I considered calling it the Versati (as in versatile) Ultralight, but its resemblance to an Italian sports car isn't quite there.

The trailer is built upon an inexpensive, barebones 4x8 utility trailer. I added a plywood floor and walls. The unique parts are the pop-up top, which I built out of PVC pipe wrapped with a heavy-duty tarp, and the devices I made to hold the top up for camping, hold it down while driving, and keep the tarp from wearing out quickly due to the wind forces produced by highway driving. It's not the sleekest camping trailer you'll see on the road, but its roominess, versatility, and especially its low cost more than make up for it, to me at least. 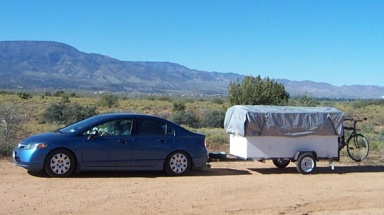 I have room inside the trailer for a comfortable cot with a foam mattress, a three-legged camping toilet so that I never have to leave the trailer at night, two big bins full of clothes at the head of the cot, a big suitcase and dozens of smaller items under and at the foot of the cot, and a small floor space where I can stand in a crouch to change clothes. In the photo below, the cot's mattress is absent so that you can see how much stuff fits underneath the cot's spring frame. The trailer, with the floor, walls, and top, weighs 460 pounds, and everything I carry inside totals less than 200 pounds. Fully loaded, it weighs well under the 1000-pound towing limit of my Honda Civic.

In my book, Build a Pop-Up Camping Trailer for Small Cars for Less Than $700, I provide complete instructions on how to prepare the barebones trailer to receive a plywood floor; how to build the walls with options for a side door, tailgate, and removability; and how to build the pop-up top. The book has photographs of every step. Pieces needed for the top's PVC frame are listed by number and length along with a cut list to minimize the number of 10-foot 3/4" PVC pipes you'll need. The photo-diagram of the PVC frame makes it easy to put together. The book also provides a complete materials list with prices as of March 2020. You won't need any special tools, just a few common hand tools plus a drill, a jigsaw, and possibly a circular saw, depending on whether you can get the plywood cut at your lumber yard.

When I bought my barebones trailer in 2010, its manual specified a maximum towing speed of 60 mph. The barebones trailers of the same size and configuration, with the same size wheels (12-inch), sold today have a maximum towing speed of 45 mph. According to retrailers of trailer equipment, the tires are the limiting factor. I don't know whether the tires on my trailer are actually different from those included as standard equipment now or if the difference is due to a change in the regulations. If you plan on traveling far enough that you'll need to drive faster than 45 mph, you can get complete wheels with tires rated for 65 mph for around $50 each. Keeping one of your 45 mph wheels as a spare will save buying a spare separately. 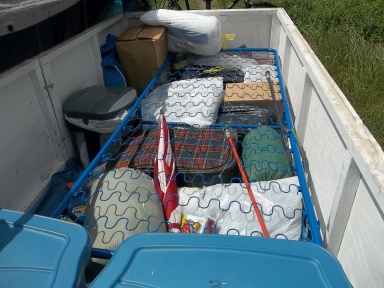 I traveled back and forth across the US for a few years camping in the trailer along the way. The book explains briefly how I carried my bike on the back of the trailer, made an outdoor sink of sorts for preparing meals, managed the toilet, chose the cot, and found safe and free places to camp. I've been using it more for hauling than camping lately. It has saved me more than it cost to build in delivery fees for appliances, lumber, etc. My little Civic is my truck when I need it to be.

The book is available in paperback and in electronic, Kindle format, which can be read on a phone or tablet as well as on a Kindle Reader.

You can read some of the book and buy it here.